Error: Please make sure you entered a valid email address and try again


Information shared with us will not be shared with any 3rd parties, and will be stored inside the UK. We will only contact you to provide promotional content, project updates and to respond to your queries.


Pixel Clash is a simple and fun card game - and it's the first to be developed by Pixel8 Games. In Pixel Clash, 1-6 people can work alone or fight as a team to take down a deadly Dragon [before it takes you down first!]

Players draw and play "Melee", "Ranged", "Spell", "Idea", "Response" and "Power Gem" cards against the Dragon and its assortment of Minions [including Witches, Spiders, Trolls and more].

This fun fantasy pixel art game is full of light strategy, random outcomes and enough variation to make for lots of replayability [alone or in a group] - we hope you enjoy it! 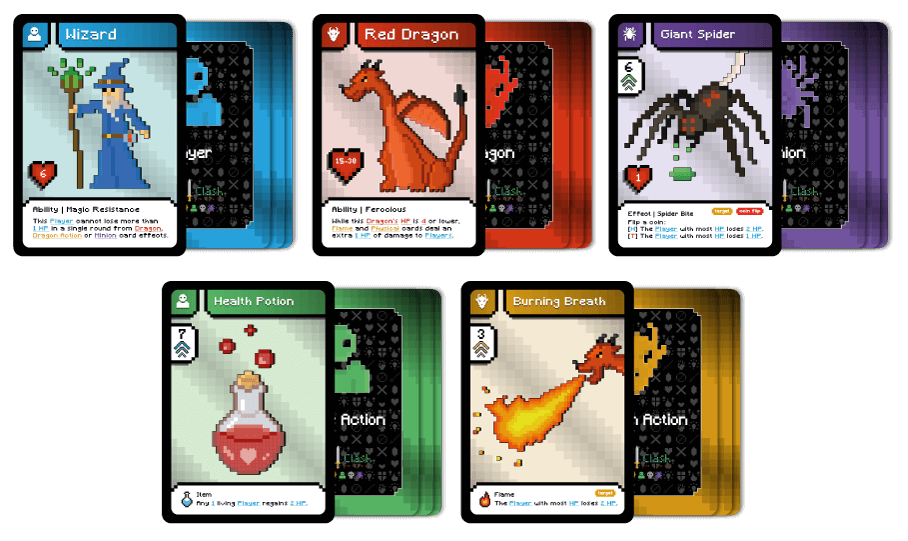 Pixel Clash launched on Kickstarter on September 8th 2021 - keep reading below for details on how you can purchase a copy of the game:


We're proud to announce Pixel Clash is now available through our Kickstarter campaign!

Kickstarter - the amazing, crowd-funding site - now allows you to purchase a copy of our game!

The beauty of Kickstarter, is that it protects you and us - if we meet our campaign goal [the minimum orders we need to produce the game] then your payment is taken and your order is produced and shipped to you - if we don't meet our goal, you get to keep all of your money!

Our Kickstarter page is now live - you can donate or purchase a copy of Pixel Clash until October 18th - all of our early-bird discounts are now gone, but we have plenty of copies of Pixel Clash still available to purchase [as well as Kickstarter exclusive T-Shirts and other rewards!]

how to play - basic game mode

Firstly, you'll need to setup the game - the instructions are pretty simple [and the game setup visual should help too]:

Once you're all setup, you can begin playing. The goal is simply to defeat the Dragon [reduce its HP to 0 HP] before it kills all of the players [or draws the 'Game Over' card] - if either of these happen, all Players lose!

Each round, complete the following steps [A-E] in order:

On top of these rules, the full instructions are included in each copy of Pixel Clash.


+ Can I get free delivery?

If you live local to us [PE30 postcode in the UK - King's Lynn area] then we will deliver your parcels personally and fully refund your delivery charge. For all other locations, delivery fees are required [but fully cover any import tax and duty - there will be no hidden charges].

+ What are the numbers and arrows on some cards?

They are the Priority numbers; they range from 1 - 7. Once Players have selected the cards to play, and the Dragon Action card has been drawn, all of the cards are then resolved [their effects are fulfilled]. This can get confusing, so the priority number shows the order that card effects happen - all 'Priority 7' cards first, then all 'Priority 6' cards, all the way down to 'Priority 1' cards last.

Cards without a priority number are always active [or their effect happens whenever it needs to based on the card's effect]. Where multiple cards have the same priority, Players may decide upon the order [for their own benefit] or flip the chance coin.

+ The game is too easy or hard for me - how can I change the difficulty?

Pixel Clash is pretty flexible - if you want to increase the challenge:

If you want to make things easier:

+ Do you deliver to my country?

Pixel Clash is available to customers in the UK, USA, Australia, Norway and EU countries through our kickstarter campaign.


We love Pixel Clash, and we're keen to help you play the game again and again - so if you're not sure about any specific rules, want to submit a question to our FAQs, or even if you just want to let us know how you feel about the game; please let us know by contacting us via email or Instagram: